In February 2017, the Aboriginal Employment Strategy (AES), one of the longest serving and most successful programs operating in Aboriginal communities across the country, celebrates its 20th year of operation and over 20 000 job placements, and 2000 training and apprenticeships.

The milestone falls in the same month as the delivery of the Prime Minister’s annual Closing the Gap report, within which employment is a key target area to achieve Aboriginal and Torres Strait Islander equality within the next 25 years.

“The Prime Minister’s Closing the Gap report highlights the significance of improving employment outcomes for Aboriginal and Torres Strait Islander people – for the past 20 years the AES has delivered a successful model built on empowerment and self-determination for supporting Aboriginal people into the workforce and improving their quality of life and the wellbeing of the entire community,” says AES CEO, Kristy Masella.

“The AES approach is about much more than job placements, it’s about mentoring and providing ongoing one-on-one support, that’s been the key, we’re proud of the work we do in creating financial independence so our families and communities can access greater opportunities and better services.”

The AES was founded in 1997 in the New South Wales regional town of Moree. At the time, in spite of being one of the richest agricultural regions in New South Wales, the Aboriginal employment rate in the town was just 44 percent.

This disparity prompted social entrepreneur Dick Estens AO, working with local Aboriginal Elders and the Gwydir Valley Cotton Growers Association to present to Government a plan for the implementation of an Aboriginal employment strategy located in Moree.

Within 12 months of opening the doors of its first office, the AES was making a noticeable positive impact in the community and within a few years was gaining momentum with corporate Australia, harvesting large scale employment opportunities in the banking sector for Aboriginal students.

In 2002, the AES launched its ongoing partnership with ANZ Bank, establishing the first Indigenous student based banking traineeships in Australia. Commonwealth Bank, NAB and Westpac soon followed, with the program being replicated around the country. More than 150 young Aboriginal people complete AES school-based and full-time traineeships and apprenticeships each year.

Today there are 12 AES office locations nationwide, made up of talented and passionate local Aboriginal people delivering over 1,000 career placements in every industry, sector and level each year.

“The success of the AES model sends a strong message about the power of harnessing the abilities and investing in the talents, expertise and passion of local Aboriginal people themselves to create positive outcomes for their communities,” says Ms Masella.

“The AES has come a long way since we first opened our doors in Moree and it is important to acknowledge the many people who have helped build Australia’s most influential Indigenous recruitment company to what it is today.

“There are many challenges ahead towards closing the gap in outcomes – as the AES has done since its inception, we will continue to work passionately to deliver industry relevant training and employment opportunities that will translate into broad positive social outcomes for Aboriginal communities.

“The Closing the Gap report shows that the employment target is not on track. AES and its local teams of Aboriginal people are needed more than ever. Local people have the solutions.”

In 2017, the AES will further develop its high impact pre-employment programs in collaboration with large-scale industry partners and will open several more offices in communities around the country. 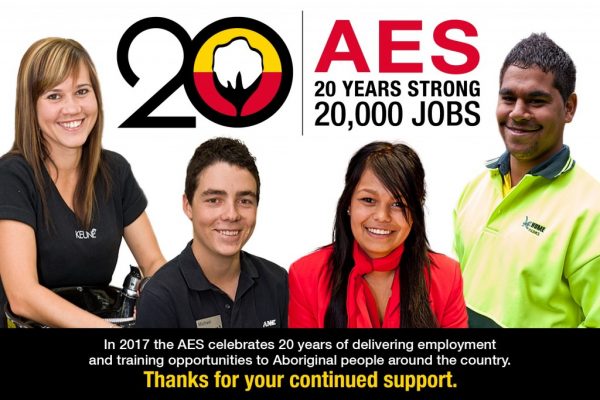